"How many exclamation points are allowed in a post title?" otherwise known as "I HAVE A KITCHEN OF AMAZING AWESOMENESS"

I don't even have a witty or relevant opening paragraph to this post so just LOOK AT IT!!!!!

Before we squee ourselves out too early here's some never-before-seen pictures from when I first moved in!  Take a big swig of wine, bless yourself with a dusting of glitter and spritz of Febreze laced with Candice Olson pheromones and brace yourself. 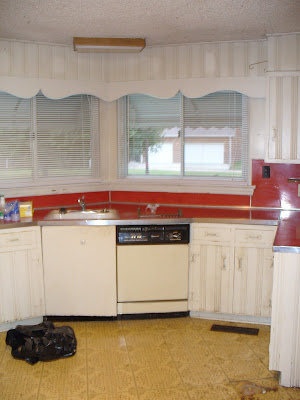 For all that is holy and full of bacon, THAT SCALLOP!!  *shudders*  I can't even remember why I bought this place... 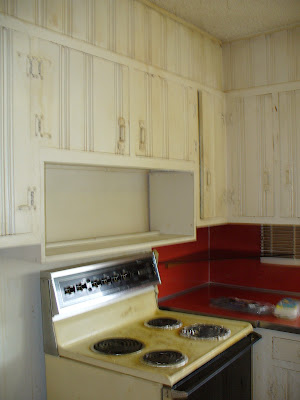 It certainly wasn't the stove because it was the filthiest thing I'd ever seen (or smelled).  We drug it out to the back patio and put it out of its misery.  The smoky glass corner shelf was a nice touch though. 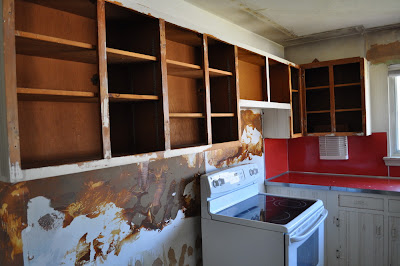 And then this was the day of demo just a few short weeks ago.  Ahh memories.  Looks worse than the pics above but in person it was actually better.  Well, it smelled better and your eyes didn't have grease stains.
Mostly...
But back to present day fabulosity:
I'm not gonna lie - I'm really happy.  Sometimes I'll just be walking down the hall and see the kitchen and be like "DAMN!  How'd that sexy kitchen get in here?" and bask in some awesomeness for a second or two and then keep walking.  It's energizing.  Kitchen is the new crack.  Or meth depending on what part of the country you're from. 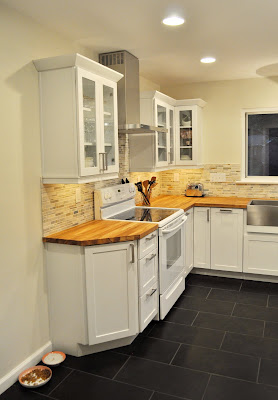 Charlemagne is slightly pissed that her food bowl has been moved twice in two months.  Apparently she doesn't appreciate Kitchen and the floors as much as the rest of us.  Get some design sense, already!!!
And speaking of the floors: 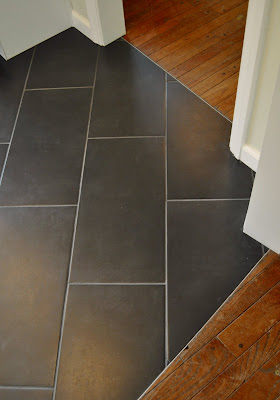 This is the corner of Kitchen looking in as you're standing at the entrance to the hellgate.  The way all that lines up makes me tingly.
Because I've run out of kidneys and eggs to sell for money most of my appliances are remaining.  Honestly I don't hate Mr. White Stove since there's so much white in here so until science figures out a way for me to spontaneously grow new body parts for the black market he'll just have to make nice with Mr. Sexy Hood.  In related stove news, not having an actual countertop on either side of it for such a long time makes this setup feel like I'm living in some kind of fantasy castle of luxury where I cook in a mink stole and can set bowls down on my left AND right!  Thus far I'm loving the wood (that's what she said) and can't imagine stone or a quartz in this space at all.  Currently it has about 4 applications of IKE-RA's own butcher block oil on it which surprisingly doesn't look like oil but instead looks like buttermilk.  Trying pouring that on your counters...  Weird. 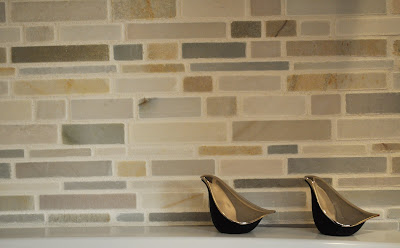 I think we just talked about birds (ahem...) but these were a Christmas present and I still like them so DON'T JUDGE ME!  But look: tile!!!  It's warm, it's cool and sometimes I like to pet it when no one is looking. 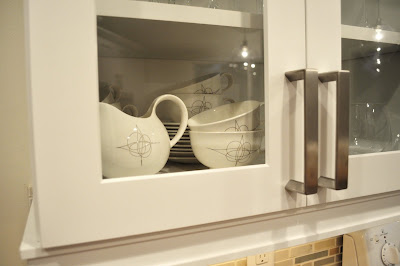 Well hello Eva Zeisel dishes!  We'll talk about you more one day in the future but for now seeing you showcased like this makes me exceedingly happy.  However I'm still moving in and nothing is in its final place.  I started putting things in cabinets a few weeks ago but somehow the contractors managed to get sawdust INSIDE the cabinets even where they weren't working... Contractor magic.  Also, my cabinet stylist was busy this weekend (WTF?  Don't you know who I am??!) so I know he's going to take one look at my teacups and *eyeroll* and make them prettier elsewhere.
Know what else makes me exceedingly happy? 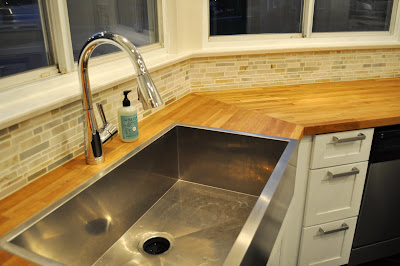 Venuto FINALLY is in his home!  Venuto has been stuck in a closet since um... last summer when he came into our world.  He's a good sport.  And he's sexy as hell and totally pwns that sink which is pretty tough to do because have you seen that sink?!

That Magne-dock, lock and drop it technology rocks my world.  (I think I just found your new commercial deal with Huey, Brizo.  You're welcome.) It's like the soft close feature on my cabinets drawers but for faucets.  Us people of luxury in the 21st century can't be bothered with returning things to their rightful positions and rely on technology and faucet magic to do it for us.  Hey, I'm a busy Madame and thanks to Brizo for understanding my needs. 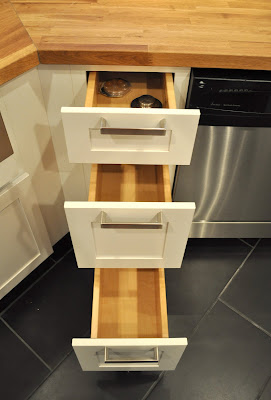 Good thing these drawers do have that soft close feature since they are stuffed to the max with NOTHING because I have so much cabinet goodness that I actually have tons of empty storage.  Better go shopping... 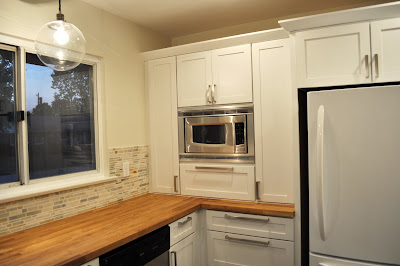 And look at all this space!  The microwave trim kit finally arrived after its journey through Middle Earth although not after a very harrowing ordeal in which I had to pick it up at the local FedEx hub located at the corner of Murder Ave. and Girl, You Do Not Belong Here Blvd where I had to be buzzed in through a cage, walk half a mile, go through airport security and then forced to talk to the guard for ten minutes about his potted meat lunch (because of the economy and all) eaten with the heels of bread (which he called toes) all in front of a giant industrial fan causing me to hold my hair out of my lipgloss with one hand and sign for my package with my other hand and - as elegantly as possible - tuck my skirt between my thighs so I didn't flash potted-meat man from the hurricane force winds behind me ONLY for the contractors to later tell me it didn't fit.
Again.
I will fuck you in the face with potted meat if you don't put that gawddammed microwave in that cabinet you lazy sonsabitches.  Apparently that did the trick because magically 30 minutes later the microwave was snuggled in nicely.  It was either my threat or Nick's help... one of the two.
It's not all white and beige in here!  But those can stay nice and tucked away. 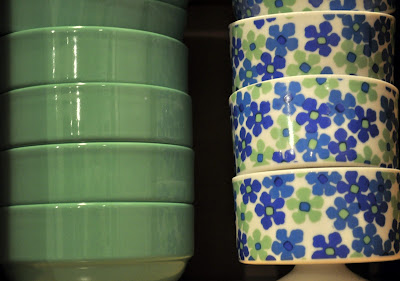 I do have a bit of a thing for ugly vintage dishes...  They just want a good home!!!! 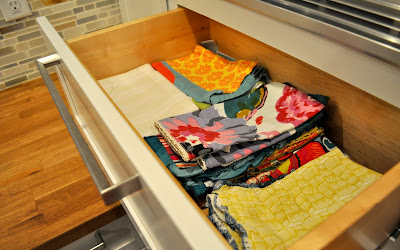 Wheeeee!!!  More rainbow!!  To reduce paper consumption I made an effort to only use cloth napkins with meals last year but having 12 of the same pattern is so boring so now I just pick up a couple of whatever's on clearance at Anthro when I'm there.  I feel like you're looking in Kitchen's panty drawer... 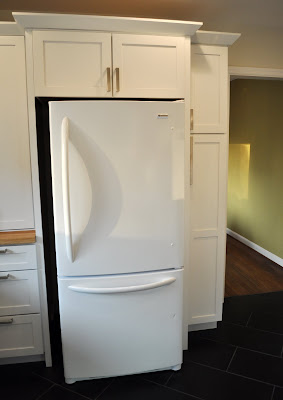 And finally we have the pantry and existing Mr. White Fridge.   He doesn't quite fit the space which was designed to hold a glorious counter depth fridge one day when I can afford it but in the meantime welcome to the real world y'all where everything isn't HGTV perfect all at once.
Can't forget airport runway lighting!
Kitchen's getting sleepy from all this excitement...
The ModSauce Ranch doesn't look so mint green at night!  Pardon the blurry picture but I was taking this perched on my car door in my neighbor's yard in the middle of the night and people were starting to wonder (more than normal) but those two windows are the kitchen overlooking the corner of my street and everyone driving by can be blinded by the awesomeness of Kitchen since I don't have shades yet but that will be remedied shortly once the summer come and the afternoon sun will turn Kitchen into the hellgate again.  But for now it's breezy and making my neighbors jealous.  Or they think I've turned into a chef/exhibitionist...
Sigh...  It is done.  It's not perfect but I'm loving it so far - I think it looks like me and suits my house and my neighborhood.  And by "suits" I mean kicks its ass of course.  So thanks to Charlie Sheen (not really) Cupboards and Brizo and jeezus and the special people that have given me advice and all my readers and tweeps who've been supportive or at the very least laughed with me (at me?) during this process and omigawd *waves hand in front of face* I might cry so somebody punch me before I show you I'm a real human!  I've got more deep kitchen thoughts coming in the future about working with contractors and possibly even a guest appearance by my cabinet daddy, Nick, but for now this:
BLADOW.
Posted by ModernSauce at 1:02 AM

Email ThisBlogThis!Share to TwitterShare to FacebookShare to Pinterest
Labels: Brizo, Cupboards, kitchen, renovating, the ModSauce Ranch, things that are pretty